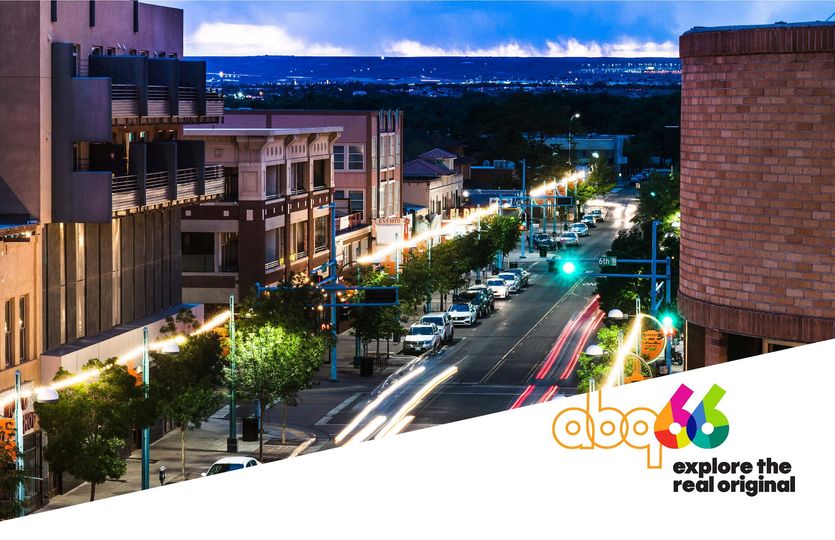 The City of Albuquerque Economic Development Department launched a comprehensive marketing campaign today to revitalize Albuquerque’s historic Route 66 by boosting consumer activity and sales revenue along the corridor. Called “ABQ 66,” the program is part of the City’s post-pandemic economic recovery plan to support local businesses and boost outside economic investment by championing what makes Albuquerque unique.

“We are excited for residents and visitors alike to rediscover the treasures of the Mother Road, whether by ART bus, cruising in a lowrider, walking, or biking,” said Mayor Tim Keller. “Route 66 is an iconic destination that has brought culture and commerce into the Duke City for generations. Today it’s home to businesses that we’re ready to champion, and the capacity to take on new development that we want to support.”

The campaign, which will promote a 14-mile stretch of Central Avenue between 118th and Tramway, includes fresh branding, special events, light pole banners, a website, videos, and digital and traditional media placements. Albuquerque-based RK Venture was chosen through a request for proposals to develop and implement the campaign, which was approved by City Council last year, using CARES funding.

“ABQ 66 – Explore the Real Original” acknowledges Route 66’s storied past while looking to its very bright future,” said Richard Kuhn, owner and executive creative director of RK Venture. “This campaign serves as an invitation for everyone to drive, walk, or ride public transit along Route 66 and experience all the art, shopping, food, and fun the legendary strip, in all its sun-soaked neon glory, has to offer.”

Businesses along the corridor have been doubly challenged, first during 2016 ART construction and then by the pandemic’s economic toll. By promoting what is unique about the area, the City intends to reignite Route 66 as an attractive destination for locals – especially those living outside the corridor – and tourists alike.

“The majority of businesses that line this colorful strip of boutiques, art galleries, bars and restaurants are local, so prosperity for them contributes to a healthy economy for us all,” said Synthia R. Jaramillo, director of the City Economic Development Department, which is managing the campaign. “By strategically encouraging activity today along Route 66, we also attract new investment tomorrow.”

The Rt. 66 Visitor Center under construction at the corridor’s western end will add to the vibrancy of the area with a taproom, a drive-in movie area, a neon sign graveyard, and a heavily-anticipated lowrider museum.

Creative from the campaign and the lowrider from the ABQ 66 video will be on display at Nob Hill Summer Fest on Saturday, August 7.